Is the Burks GV Simplex or Duplex Condensate System the smarter choice for you?

A condensate pump is a type of centrifugal pump. It is so named based on the kind of fluid it handles. It is designed to use with appliances that generate water build-ups such as refrigerators, air-conditioners, and other appliances. The water is formed out of the water vapor, which is formed from the steam when warm air meets the cool unit. The function of the pump is to remove water from the system through a pipe.

Features and benefits of the Burks GV Series Condensate Pumps

Burks condensate pumps are superior quality pumps known as Condensate Return Systems. These condensate units are intended for automated hot water condensation return coils, radiators, etc., to high and low-pressure boilers. In other words, these units can return liquids and water to the overhead tanks used in the systems based on industrial gravity circulation. The GV series has the features of bronze impellers that are precision balanced, 200 degrees F of a temperature rating, and receiver tanks of cast iron. Burks GV models head to 130 feet and flow to 80 GPM with 1 1/4 inches discharge. Its RPM is 3450. Its HP ranges between 0.33 to 3, while boiler feed HP is 1/3. All units are dispatched finished, and they are ready for an easy and quick installation.

These condensate pumps find their use in boiler feed and condensate return systems. The advantage of non-overloading performance testifies the quality of this product. It is not just a number on your performance curve. An overloaded motor is in the danger of tripping when the required work exceeds the motor's capacity. However, the better-quality larger motors of the Duplex system and Burks 3GV6-14D can sustain the GV Series under these conditions because it is non-overloading.

Bronze impellers used in Burks condensate pumps that are precision balanced are in itself the hallmark of a standard that this company brings about in its products. It requires specialized skills to cast and balance the impellers accurately. It reflects the commitment to outstanding quality and consistency that this company stands for.

There are several other features of the Duplex system and Burks 3GV6-14D, GV Series, Duplex, Condensate Return System, Boiler feed other than the ones specified above, such as the top pull-out design system. This design facilitates the ease of service and maintenance. With this design in place, the rotating assembly can be removed without disturbing the piping or the volute.

The advantage of the float switch or alternator is that pump motors can be controlled automatically. There are present high and lower levels at which the motor can start and stop.

Both simplex and duplex style condensate pumps serve the same purpose. They are designed to automatically return hot water condensation from coils and radiators to boilers at low and high pressure. They also find an application in industrial systems using gravity circulation with overhead tanks where water and other fluids are returned.

However, where the system is designed for heavy loads of liquid or condensate return, the Duplex Unit is required. It is also used in systems that require a stand-by-pump. Both types of units, Simplex and Duplex, can be converted into a feed unit for a boiler with the use of a make-up valve that is solenoid operated.

Most of the features of the Burks condensate pumps, whether they are Duplex system and Burks 3GV6-14D, GV Series or Simplex system, and Burks 3GV6-9, GV Series are the same. In other words, Simplex system and Burks 3GV6-9, GV Series feature pre-wired and mounted motor controls, alternator or float switch, and both of them have bronze impellers that are precision balanced and the top pull-out. The performance curves are non-overloading, giving them the quality of impeccable performance. They are rated for temperatures up to 200 degrees F. Its high-quality durability, machinability, leak-tightness, and corrosion resistance come from the use of cast iron.

In a nutshell, Burke condensate pumps are excellent in quality and efficiency. They are durable and have a long life. They are designed to make maintenance easy. The material used in their construction is of high quality to ensure trouble-free consistent and continuous working for a long time.

Burks pumps are a part of Crane Pumps and Systems and its registered trademark. The company manufactures world-class pumps and accessories. The company was founded in 1855 by Richard Teller Crane.

Pump Products’ company is a national distributor and supplier of pumps. The company offers the largest selection of pumps at prices that are the lowest anywhere across the nation. The company stocks all major brands and promises the fastest delivery in the industry. You can contact the company at 1-800-429-0800.

Prosser Dewatering Pumps are Small but Pack a Punch

Often a site may require dewatering. Dewatering is the process of extracting and removing water. Dewatering may be required in a mine shaft, a riverbed, or a construction site or any other area. It may be required for various reasons, but most frequently it is required before beginning some work in the area. Prosser dewatering pumps can be beneficial with their small size but capable of packing a punch. The dewatering process is useful in areas that are threatened with waterlogging. It is also commonly used when a building to be constructed has its foundation below the water table.

Prosser Dewatering Pumps
Prosser portable electric submersible dewatering pump is the most efficient pump you can have for the removal of unwanted water. The design of this pump is slim. The slim design advantage is that this Prosser dewatering pump can fit where other pumps will fail to fit in. It can easily fit anywhere inside even small dewatering wells.

If  you are looking for high head or high volume performance, Prosser Standard Line dewatering pumps are the ultimate recommendation. There are over 100 outstanding models they are available in.

Prosser 9-01000 - (3/4 HP) Series Dewatering Pumps
Prosser dewatering pump of 9-01000 - (3/4 HP) Series is a small yet powerful electric pump that is portable and submersible. They are compact and lightweight units. Their performance is quiet, and they are designed to operate in any position. This pump can also be easily applied for higher head applications. Its unique in-line design feature makes it a cool-running motor, while its heat is transferred to the pumped liquid. These Prosser dewatering pumps can even operate efficiently and continuously in as much high-temperature water as 104°F (40°C) and in a 5 to 9PH range. 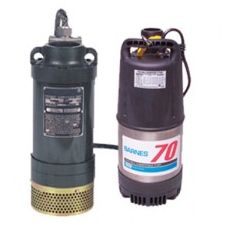 Prosser dewatering pumps can be simple and easy to operate because you do not require any priming, or there is no requirement to operate any foot valve or suction hose. You need to place the pump simply at the location where dewatering work is required, turn on the pump, and leave the rest to this most efficient pump.

The in-line design of the pump makes for the smooth running of the pump, and the noise level is at its minimum, while the motor remains cool. The motor is resilient and tough, as evident from the fact that it continues to run even after the removal of water without getting damaged. If the dewatering job is big enough, you can use more than one pump to ensure quick disposal of surplus water.
Prosser dewatering pumps have the edge over the pumps from other manufacturers because of its slim design advantage. This pump can remove water even from cramped areas. It can easily fit in spaces; others can’t. The great and powerful flow rate of this pump will quickly flush out large volumes of water.

Prosser Company/ Crane Pumps and Systems
Prosser line of specialty submersible dewatering pumps is a unique product line of the Crane Pumps and Systems family. This company is a world-class manufacturer of pumps, accessories, and services. The founder of this company was Richard Teller Crane, who had an unwavering commitment to innovations that drove the industrial revolution and has continued to drive the company for 150 years.

Pump Products Company
Pumps Products, a discount pump supplier and a national pump distributor, is dedicated to supplying the highest quality products, including pumps, parts, electric motors, and controls at the lowest prices. The company stocks all major brands, including Prosser/Crane brands. The company has in its stock all models of Prosser dewatering pumps. The company's experts are ready to help you with the selection of products to meet your needs at the best price anywhere. For any assistance, including price quotes and to place your order, you can call the sales counter of the company at 800-429-0800.